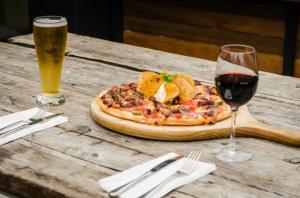 Beer (or wine) and Pizza make a classic combination – talk about umami! However that feel good effect may have more to it than the taste and the buzz of alcohol. It may in fact be a sign that opiates are being released into the brain. But how does this occur? And how can a gluten allergy be involved in this?

In my reboot! post mentioned how I was diagnosed with a Gluten allergy. At the time, I was shocked! After all, I did the test to rule out the possibility of a gluten allergy as a cause for my health problems! As such I faced having to give up my hobbies of beer brewing and bread making with gluten grains, so I looked into what could have triggered the allergy. My answer came when I looked at alcohol and below I delve into what I found out.

Allergies start when an unusual particle (such as a food molecule) crosses a barrier within the body. These barriers serve to keep out those particles and exist in the Gastro Intestinal (GI) Tract as well as the Brain, and they are formed by molecules that are tightly woven together and allow only particles of a certain size to cross them. Whether the barrier itself has integrity or is in a weakened state making it “leak” is a major health concern. In my studies on Allergies and Autoimmune and Digestive Health I have posted the factors that lead to leaky barriers. Of these factors, stress and alcohol are quite possibly the most important.

Stress in itself draws blood away from the digestive tract, slowing down the breaking down of food and the motility of it through the body. Just think of when someone said something that made you anxious or distressed whilst you ate – what happened inside your gut? Did you feel a tightening, a constriction in the gut and a loss of appetite? This leads to larger than normal food particles that linger in the GI tract. Having partially digested food remain in the GI tract is damaging to it, as we shall see below. And a family of food particles that we do not wanting to have lingering around are lectins, in particular wheat lectin.

Dietary lectins are present both in wheat and in beans and legumes. Like phytates, they serve as protection for plant seeds, such as grains and legumes. Lectins cause damage as they are sticky proteins that bind to other molecules in the body and in the process stimulate an immune response. And this immune response damages barrier lining and widening the junctions in it. Put another way, lectins cause holes in barriers such as the GI tract and allow unusual particles to cross it. [1]

Lectins are broken down and destroyed through sprouting or fermenting, which makes soaking and sprouting your legumes all important! However all too often these grains and legumes are not sprouted, and the lectins are still present in them. Even heating foods containing lectins, such as in making bread does not destroy the lectins in them. Thus even gluten free bread made with bean flour such as Garbanzo or Chickpea Flour contains lectins that can damage the GI lining. [2] And even fermenting (in the case of sourdough bread) almost always only ferments a small portion of the overall grain flour used in the bread. So be aware that eating any food that contains lectins (such as foods made with wheat or beans), damage may be caused to the GI lining making it more permeable.

A damaged GI wall and intestinal permeability also results from an overgrowth of pathogenic bacteria in gut caused by stress, poor gut motility or diets low in probiotic foods.With a more permeable intestinal barrier, more molecules normally prevented from crossing this barrier are allowed to cross, such as partially digested protein molecules (or peptides). These molecules can then prompt an immune reaction to their appearance leading to an inflammatory response. This inflammatory response can then lead to increased intestinal permeability in turn causing an inflammatory spiral (ie increased inflammation). This sets the stage for the immune system to form antibodies so that it can react more effectively in the future. And in the case of foods with gluten, an allergy or sensitivity to gluten is the result.

Gluten proteins may also be digested improperly and metabolized by pepsin and hydrochloric acid in the stomach into gluteomorphin peptides.  This is the case when people have low stomach acidity which leads to low production of pancreatic enzymes (which itself may be caused by stress). In turn this leads to impaired intestinal wall enterocyte and enzyme function causing problems with digesting protein in food. Most importantly Gluteomorphin peptide breakdown is inhibited[3]

When intestinal enzymes do not break down these peptides, they cross the GI barrier intact. Gluteomorphins can also cross Blood Brain Barrier (BBB) where they bind to opiate receptors in the brain. And opiate receptor binding lead to euphoria, addiction and cravings for more (and appetite stimulation)[3].  This may explain the craving for and happy buzz you get from pizza – an opiate high from Gluteomorphins! However that high and craving could be a sign of both intestinal permeability and a gluten allergy.

Opiate receptor binding of gluteomorphin in the brain also has direct links to schizophrenia, autism and ADHD. In addition, partially digested  peptides crossing the GI barrier inhibit enzymes which break down used protein metabolites in body, such as hormones and neurotransmitters. This is turn leads to increased circulation of them leading to damage to tissues, organs and the brain. Gluten meanwhile is associated with several specific brain health issues[4][13]

This ataxia (impaired muscular co-ordination) you may be familiar with – it happens on those occasions when we drink too much alcohol! However alcohol also poses even more dangers. Drinking alcohol even in moderate amounts has been shown in a study to disrupt the GI lining making it leaky[5]. In addition, alcohol has been shown to disrupt and weaken the Blood Brain Barrier (BBB)[6].

Other factors, including immune mediators and inflammatory compounds can weaken the BBB leading to neural degeneration and diseases such as Alzheimer’s, Parkinson’s and epilepsy[7]. And these inflammatory compounds can stem from a leaky gut, which in itself has been shown to contribute to a leaky BBB[8]. In fact, any factor which weakens the GI barrier including stress, the use of pharmaceuticals and exposure to allergy foods and toxins can also weaken the BBB and lead to neurodegeration[9].

A key point involved in this is the additional load of toxins and peptides that are allowed into the body through a leaky gut. These then create metabolic waste as the immune system tries to tackle them. All of this waste then needs to be cleared out by the liver, and the liver shares nutrient resources for its function with the immune and adrenal systems. Thus under increased work load to process this metabolic waste, or if the nutrients it needs are being used due to stress or an immune response, the liver will take longer time to break down this waste leading to damage caused to the body as they keep circulating in it. Thus drinking alcohol will enhance the potential for this damage to the body, for it is also a toxin that the liver deals with.

A key point to note is that brain degeneration related to Gluten is not always associated with GI related symptoms or discomfort, as studies have shown[12] [13] [14]. These studies postulate that the immune system response to gluten is different between people. Thus an allergic response to gluten could manifest in GI problems with some people and neurological (Brain) related problems with other people. Meanwhile these studies show that avoidance of gluten lowered the onset of GI and neurological problems. A gluten free diet moreover may also prevent these problems occurring at all.

Personally I never had GI problems from eating wheat or gluten grains. However my tests showed I had gluten antibodies in my brain, antibodies linked directly to Gluten Ataxia and Cerebellar degeneration. From looking into this, I see that alcohol and stress played a key role in weakening my BBB and triggering the formation of those antibodies. And I certainly don’t want to lose my muscular co-ordination and ability to exercise due to Gluten Ataxia. Nor do I want the same to happen to you!

So I offer you the following advice:

An excellent article about Lectins, GI health and the benefits of sprouting from the Precision Nutrition

Alcohol and Weakening of the Blood Brain Barrier